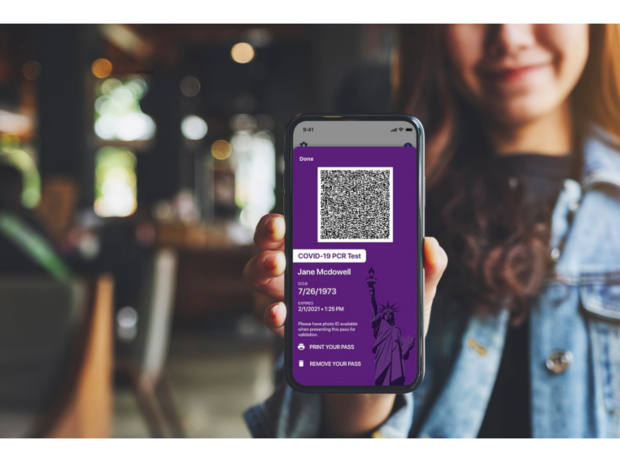 More than 100 million Americans have received at least one COVID-19 vaccine shot. The proof? A 4-by-3-inch paper “vaccination record card” issued by the U.S. Centers for Disease Control and Prevention.

In a post-pandemic world, that humble card for those who are fully vaccinated could become an important document used for travel, attending events, returning to the post-pandemic office and other purposes. At least a dozen colleges and universities have already announced that they’ll require students to become immunized before they return to campus in the fall. Companies are currently weighing whether they will require employees and patrons to present proof of vaccination as a condition of employment or engaging in business.

In the meantime, here’s what experts say you should know about vaccination cards.

The first thing experts recommend once you’ve been vaccinated is taking a digital photograph of both sides of your personal record card. You can also scan the card and save the file on a laptop or desktop, said Megan Ranney, an emergency physician at Rhode Island Hospital and an associate professor at Brown University.

One thing you shouldn’t do: Share your personal proof of inoculation on Facebook or other social media sites, which could lead to identity theft because the CDC card includes a person’s date of birth as well as first name and last name.

“I would not post it to social media with my birthday showing. It is a unique identifier that could allow somebody to potentially steal your identity, so I would first be careful about that,” epidemiologist Danielle Ompad, a professor at the NYU School of Global Public Health, told CBS MoneyWatch.

By contrast, you may want to print a copy of the photo of the vaccination card and store it in your wallet. While some experts advise against having the original card laminated, so that booster shots of vaccine can be added if that becomes necessary, others say that’s OK because a more sophisticated record-keeping system is likely to be in place by then.

“I would laminate it because by the time a booster comes along, the technology will have evolved,” suggested Dr. Maureen Miller, a professor of epidemiology at Columbia University’s Mailman School of Public Health.

You can get your card laminated for free at office supply store Staples by using the code 81450 or at Office Depot with code 52516714.

Leave the original at home

Make sure to store the original hard copy of your vaccine card someplace safe — you don’t need to keep it on your person at all times and risk losing it. Experts recommend keeping the original with other important documents or medical records and carrying just the digital copy.

“It doesn’t need to be carried at all times at this point, unless you’re traveling or doing something else where you’ll have to provide proof of vaccination,” Ranney said.

Dr. Amesh Adalja, a senior scholar at the Johns Hopkins Center for Health Security, said he keeps his vaccination record tucked into his passport (along with a card showing he’s been vaccinated against yellow fever).

Notify your primary care doctor that you’ve received the vaccine, as you would with any other inoculation. This helps health care providers to ensure your record of immunizations is up to date.

Not everyone has followed experts’ advice to store vaccination records someplace secure. University of Illinois gymnast Evan Manivong recently nailed a perfect landing during a vault competition — and celebrated by pulling out his vaccine card tucked inside his leotard and flashing it to the audience. “Go get vaccinated everyone!” the 20-year-old advertising major later tweeted. Videos of the magic moment went viral this week.

What happens if I lose it?

If you do lose your card, don’t panic. Every time a vaccine is administered, the provider records it with the state’s immunization registry.

“Those flimsy pieces of paper aren’t the only record of your vaccination status,” Adalja said. “People should keep the cards safe so they have them on hand, but it’s not the end of the world if they lose it or if it goes through the washing machine.”

If you do misplace your card, call your state’s health department and ask for a replacement.

“Right now it’s what we have as proof that you’ve gotten the vaccine, but it’s not impossible to replace,” said Dr. Christine Whelan, clinical professor of consumer science at the University of Wisconsin at Madison.

“Other countries aren’t giving out pieces of paper like we are, and this may be a quaint thing we are doing. There is something satisfying about leaving with the card copy record just in case,” she said.

No universal standard — yet

President Joe Biden’s chief medical adviser, Dr. Anthony Fauci, this week said the U.S. government will not mandate so-called vaccine passports for travel and other business activities. Anything resembling a digital pass is likely to be developed by the private sector, he added.

Some experts lament that the government did not develop a standardized, digital proof of vaccination earlier.

“I think the U.S. government should have thought of a digital app early on and had it ready to go so that it activated when a person got a vaccine,” Adalja said. “Now we’re having to scramble to come up with a solution that’s digital and secure so people don’t have to worry about carrying that card around.”

Ideally, one’s vaccination status would be integrated and stored with other personal travel information that’s reflected in programs like Global Entry and TSA PreCheck that ease the process of traveling through airport security.

Scammers are also capitalizing on the low-tech record-keeping system. Hundreds of fraudsters are selling fake versions of the CDC-issued vaccine cards through ecommerce platforms including eBay, Etsy and Shopify, according to Saoud Khalifah, CEO of Fakespot, which uses artificial intelligence to warn consumers of online retail scams.

The scam cards are being advertised at roughly $20 a pop, and are also offered in bulk. The fraud is brazenly out in the open. Fakespot has identified hundreds of Facebook pages and eBay listings offering “vax-cards” and “blank vaccine cards” for individuals who might not have been vaccinated yet.

“It has introduced this new dynamic to society where people can counterfeit immunity and replace it with a fake card. It’s a new concept we haven’t seen before,” Khalifah told CBS MoneyWatch.

Khalifah suspects that some purchasers of the phony cards are anti-vaxxers who don’t plan on becoming immunized, but still want whatever access the card affords them.

The FBI has warned that such schemes violate federal laws prohibiting unauthorized use of an official government agency’s seal, including the one for the CDC. Fraudulent use of an official federal seal constitutes a felony that carries a maximum penalty of five years in prison.

North Carolina Attorney General Josh Stein and a group of bipartisan attorneys general this week called on the e-commerce site OfferUp to clamp down on the illegal sale of blank and forged COVID-19 vaccination record cards. This kind of fraud puts the general public’s health at risk, according to Stein.

“These cards will result in more people becoming sick by more variants of the virus and more people dying as the pandemic takes longer to get under control,” he told CBS MoneyWatch. “By not getting the vaccine, it means more people will get infected with variants and that threatens everyone’s health.” 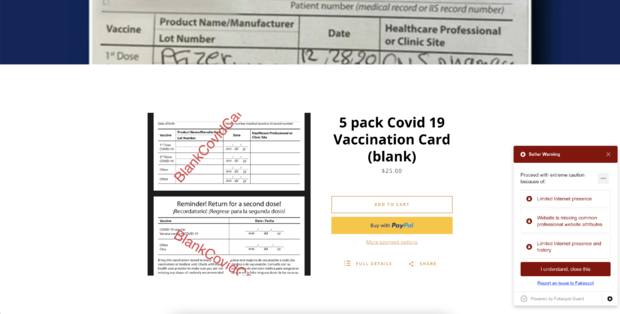 Race for digital passports and other solutions

As Fauci suggested, private companies are already developing ways for people to show they’ve been vaccinated or are coronavirus-free. For example, New York authorities are testing a digital health pass powered by blockchain technology in partnership with computer science company IBM.

“The aim is to eventually provide New York residents a simple, voluntary and secure method for showing proof of a negative COVID-19 test result or certification of vaccination,” IBM said in a press release last month.

New York recently piloted the so-called Excelsior Pass with the Brooklyn Nets at one of the National Basketball Association team’s home games at Barclays Center in Brooklyn, New York. It will also be tested at theaters and other venues as more New Yorkers become vaccinated.

“The Excelsior Pass will play a critical role in getting information to venues and sites in a secure and streamlined way, allowing us to fast-track the reopening of these businesses and getting us one step closer to reaching a new normal,” Governor Andrew Cuomo said in a statement last month.

“Verification will soon be a requirement for travel, work, venues, even schools and every state might have different rules and guidelines. We need one centralized system to ensure vaccinations and certifications are not lost and that personal information is securely stored,” said VaxAtlas CEO Judi Korzec.

VaxYes is another tool that provides free, HIPAA-compliant digital vaccine records for inoculated individuals. Company CEO Mohammed Gaber expects the product initially to be used most widely in the travel sector.

“I personally went through the highs of getting both doses of the vaccine and the lows of thinking and fearing I had lost my card. Everyone is going to have anxiety around this card and how to safeguard it,” Gaber said.

VaxYes has partnered with different states and organizations around the U.S., including Kansas, which is testing the tool to allow residents to return to shows and other events. To date, thousands of Americans have digitized their paper cards through VaxYes, according to the company.

“People are already starting to think about summer travel plans, and they see this as an enabler for getting back to normal and resuming travel activities,” Gaber said. “We’re super excited to be a part of the solution.”